MTHFR and Acid Reflux: the Cause and the Cure

February 15, 2015 Introduction to Methylation and MTHFR

Have you ever heard that we eat first with our eyes? Its true! The sight of food activates a series of neurological reflexes and pathways that primes our system for digestion. However just looking at food is not enough to digest it; we actually need to get all those nutrients inside the body.   Most people assume that if they chew food and swallow it they will absorb it.   This unfortunately is not always the case.   Dr. George Goodheart said this much over 40 years ago when he commented how in America we aren’t malnourished, it’s that we simply don’t absorb our food.

Digestion has more to do with what we absorb rather than what we put into our mouth.  Just eating your veggies is one thing but making sure they are fully absorbed is another entirely. These nuances of digestion will become clear by looking at how the stomach actually functions in our day-to-day life.  Compared to an organ like the brain, the stomach is very simple. But the stomach’s simple design does not protect it from dysfunction.

Stomach problems are among the most common complaints in our society. It is now known that up to 80 million Americans suffer from gastroesophageal reflux disease (GERD). And sales of the acid-blocking proton-pump inhibitor Nexium (aka the purple pill) are in excess of $6 billion dollars per year – making it the second highest selling drug in America!  If 25% of the population suffers from acid reflux and acid-blockers are selling billions each year, then people are dealing with a lot of stomach problems. And as we shall see, by using the right supplements in the right dose, it doesn’t have to be that way!

As most people who have experienced heartburn can tell you, the stomach’s contents are acidic. The stomach’s main job is to produce an acidic digestive juice called hydrochloric acid (HCl). When the stomach is working normally, the acid in the stomach should reach a pH of around 3.0. And to make the acid we depend on for proper digestion, an enormous amount of energy is required.

So much energy is required that it takes about 1500 calories per day to produce enough stomach acid.  And these calories have to come from our mitochondria.  But when we are tired, toxic, sleep-deprived, and suffering from any number of chronic conditions the body will struggle to produce enough cellular energy – and our stomach acid levels will decline.  And as I have pointed out before, people with hypoglycemia have terrible digestion since every time our blood sugar drops it becomes impossible to make enough stomach acid.  And if that weren’t enough, people suffering from untreated methylation issues are clearly at risk for low stomach acid as well, since it is known that methylation issues significantly impact the function of mitochondria.

The process of digestion is very complex and requires a lot of energy – more than almost any other part of our body.  With high energy requirements every day, our digestive system becomes an easy target when we start dealing with long-term health issues. The reason we suffer from poor digestion is that stress, toxins, malnutrition, and lack of movement conspire to interfere with this most important process.  And genetic imbalances certainly don’t help anything.

Genes like MTHFR, MTR, MTRR, BHMT, PEMT, and CBS influence levels of inflammation in the body which in turn impacts how efficiently our mitochondria are working.  ACE, AGT, ADD1, COMT, MAO and other genes also influence the gut and stomach by decreasing blood flow in response to stress.  Any loss of blood flow and any excess inflammation in the body will impair the ability of the mitochondria in the stomach to produce stomach acid.

When the energy and blood flow isn’t available to optimize stomach function, we simply won’t be able to get all the nutrients out of our food.  Lack of stomach acid will make it chemically impossible to pull apart the molecular bonds in our food that allows us to absorb all the vitamins and minerals we need to thrive.  Again, it’s not what we put in our mouth; it’s what we absorb that matters.

Without the energy necessary to make sufficient quantities of stomach acid, our digestion will slow and we will likely suffer from leaky gut and poor digestion as a result.  In addition, deficiencies in folate, B12, choline, TMG and betaine (each an important methyl donor) will lower the enzyme speed of our methyl cycle which is like trying to run errands all over town stuck in second gear.  This is a big reason why people with methylation problems are riddled with digestive issues!

Another critical molecule produced by the stomach is intrinsic factor – a molecule we need to absorb B12.  Intrinsic factor is released by the same cells which produce stomach acid.  Therefore, when the stomach cannot produce enough acid, it also cannot produce enough intrinsic factor.  This will lead over time to less B12 absorption, which can disturb our methylation cycle even more and lead to anemia, neurological disease, dementia, and even death.  B12 is critical for methylation cycle balance so low levels of this nutrient may cause wide-spread biochemical chaos.

Conditions Associated with Too Much Stomach Acid*

*While most people simply don’t make enough stomach acid, there are some situations that cause us to make too much stomach acid.  For example, a rare tumor – called Zollinger-Ellison Syndrome – can grow in the small intestine near the stomach and cause copious amounts of stomach acid to be produced, leading to ulcers and internal bleeding.

Another problem can arise in certain people who, when under prolonged stress, suffer from gastritis and ulceration of the stomach lining.  This is the individual who suffers from stomach pain no matter what they eat, when or how much.  It is important to note that only around 5% of individuals with acid reflux fall into this category of truly having too much stomach acid.

At the end of the day most people don’t make enough stomach acid.   While not nearly as common, some individuals suffer from the effects of too much stomach acid.  But that is certainly not the rule for most of us.  Many common issues ranging from methylation imbalances, fatigue, poor sleep, processed food, mold and toxin exposure, autoimmune conditions, etc. make it harder for your body to make stomach acid. This is by far the biggest threat to our digestive health, and to fix it we need to understand why.

The Muscular Oven that Is Your Stomach

To better understand the stomach, think of it like a muscular bag that acts like an oven. This “oven” helps us to cook our food by creating an acidic environment which is necessary to break down our meal and release the nutrients. And like all ovens, the stomach has to reach a certain temperature, or in this case a certain acidity, in order to properly “cook” the food. If the door to the oven cannot close all the way or if the oven cannot reach a high temperature, then the recipe will be ruined and the food will not get cooked properly. 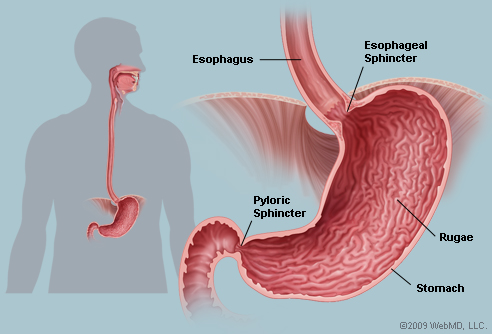 The LES has to relax to allow food coming from the mouth to enter the stomach. Once food enters the stomach the LES has to contract and close to keep the food inside for proper digestion to occur. If this sphincter doesn’t close all the way, some of the food and gastric juice will spill upstream into the esophagus. This causes pain and is the root cause of all heartburn. Lucky for us the body has an ingenious method for preventing this problem of food leaving the stomach upwards instead of downwards like it should.

The body’s genius trick for preventing heartburn is as follows: when the acidic gastric juice that is produced in the stomach splashes up onto the LES it causes this “oven door” to contract and close tight. We know this from research that has shown that when the stomach contents reach a pH of 3 the LES is fully closed. The large amounts of hydrochloric acid in the stomach, which is a normal and healthy part of digestion, actually prevents GERD/heartburn/reflux by tightening the LES and preventing acidic stomach juice from splashing onto the esophagus.

Incredibly, we’ve known about this phenomenon for the last 45 years, yet scientific proof doesn’t seem to be persuasive enough to change the way patients are treated. Such is life in the disease-care system we currently pretend is a health care system.

It is critical for the body to have a high amount of acid in the stomach. As I have pointed out already, swallowing food is one thing, digesting the food is another. What we need to know is that stomach acid is the key for healthy digestion.   This acid juice starts the process of breaking down our food. A large amount of stomach acid will create a low pH in the stomach which turns on enzymes called proteases that break up protein bonds. This starts the digestive process which continues down through the small and large intestine where nutrition that sustains our body is absorbed.

The key is to realize that even though the food leaving the stomach is acidic and hurts the esophagus, it is still not acidic enough in terms of a healthy stomach. Allow me to explain further:

This is a point that has caused a great deal of confusion and is not understood by most doctors. And for good reason, since it is quite the paradox that low stomach acid can be responsible for acid reflux and GERD. That is, it doesn’t make sense until we understand how acid helps the stomach work effectively! 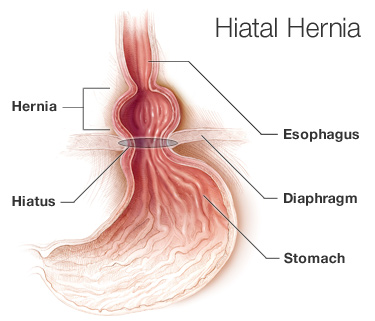 Occasionally a hiatal hernia can be a serious medical problem that may require surgery. However, most of us are living somewhere in between 100% perfect and needing surgery. Regardless of whether we have a full-blown hiatal hernia or a mild case, it is going to interfere with the function of the stomach.  Seek out the care of an appropriately trained chiropractor (you should call ahead and ask if the doctor can perform this adjustment) who can realign the stomach with the diaphragm.  By getting the hiatal hernia adjusted, along with the rest of your structural system, stomach function will be greatly improved!

Low stomach acid causes a large number of serious diseases affecting our bones, brains, and immune system.  Because we depend on stomach acid to fully absorb our food, low stomach acid can ruin your health and shorten your years.  We become chronically ill when we cannot get the nutrition we need from our food.

And when you look at all the stress, toxins, genetic imbalances, and crappy food that people eat, the stomach really never has a chance.  When genetic methylation pathways that produce energy, DNA, RNA, and antioxidants aren’t working well our stomach becomes one of the first organs that shuts down.  Why would the body waste energy on digesting your food, if it doesn’t have enough energy for things like detoxification, cell repair, and immune defense?

Remember that your body is perfect, but not invincible.  The body is perfect at prioritizing – it will shut down stomach acid production to save that energy for something it knows is more life-critical at that moment, such as fueling the heart and brain.  But that isn’t health, that’s just surviving.  And we are interested in not only surviving, but truly thriving!

And now that you know why stomach acid is so important, click here to find my recipe for healing stomach acid problems.